Winston Churchill's partially smoked cigar picked up off the floor by usherette in 1953 to be auctioned: The Telegraph

cigar once smoked by Winston Churchill is set to be auctioned, after it was revealed the usherette who picked it up off the floor in the 1950s asked the former Prime Minister's permission to tell her friends about finding it.

Violet King was helping the iconic politician and his wife Clementine to their seats at the London Coliseum to see the film premier of American musical Call Me Madam in January 1953 when she saw him drop one of his trademark smokes.

Ms King called upon her niece, who owned a company which made baby incubators, to help her preserve it in special heavyweight plastic.

She was so excited about her political memento that she wrote to 10 Downing Street asking for Churchill's permission to share the remarkable story with her friends.

Just a week later, she received a friendly letter back from the Prime Minister's private secretary, Jane Portal, which said: "The Prime Minister wishes me to thank you for your letter of April 1. He has, of course, no objection to you telling your friends that the cigar you found is his and much appreciates your goodwill."

The cigar and Ms King's letter will go under the hammer later this year at Hansons Auctioneers in Derbyshire. They are expected to fetch as much as £6,000.

A cutting from The Daily Telegraph documenting Churchill's visit to the theatre will also be displayed with the items.

The newspaper's story, dated January 31, 1953, reads: “Mr and Mrs Churchill saw the American musical Call Me Madam at the Coliseum last night. When they entered the audience rose and cheered. Mr Churchill smiled and gave the victory sign.” 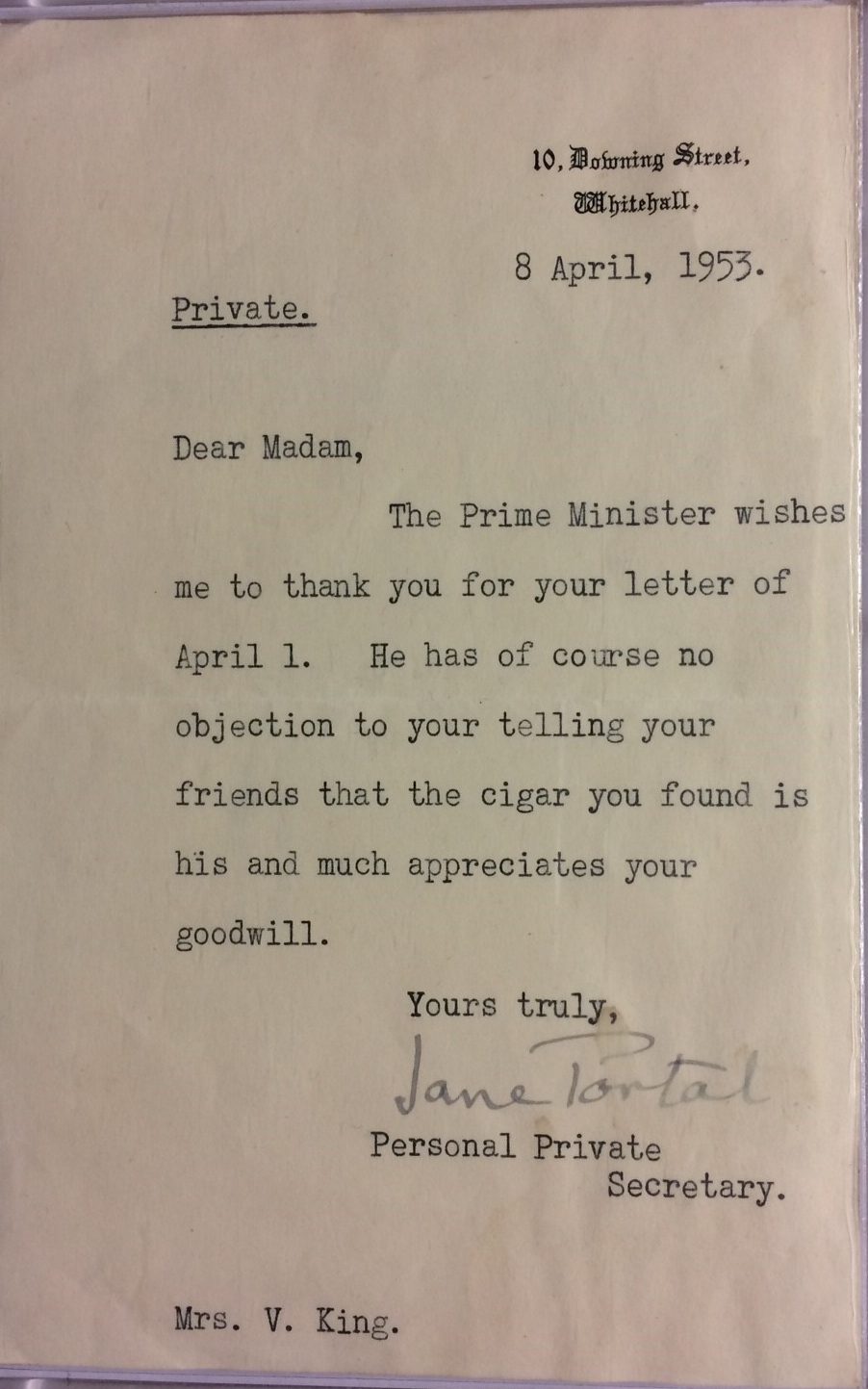 Violet’s great nephew Julian Lewis, 50, inherited the items from his father 30 years ago.

He said his great aunt had treasured the cigar right up until her death and that it now deserved to be shared with a wider audience.

“It was her claim to fame and she was very proud of it," he said.

He mused that, given how well she preserved it, Churchill’s DNA could very well still be on it.

Charles Hanson, owner of Hansons Auctioneers, said: “The provenance with this find is exceptional. The cigar was brought along to a free valuation day in Newcastle-under-Lyme and I couldn’t believe my eyes – especially when I saw the letter from Downing Street."