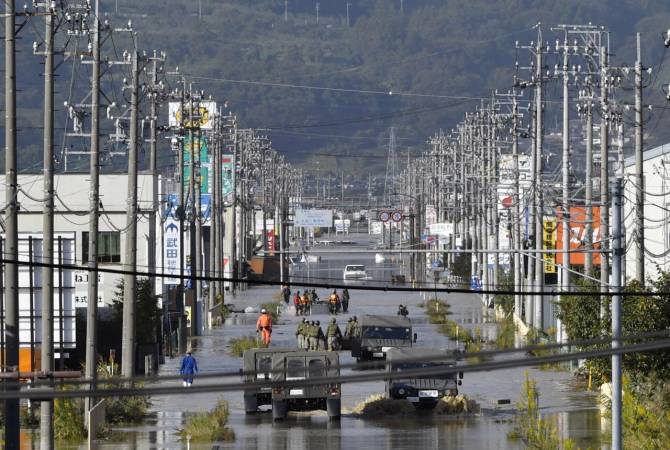 Emergency crews are still trying to locate people who went missing after Typhoon Hagibis devastated Japan over the weekend.

Japan's Self-Defense Forces were deployed to Nagano prefecture on Tuesday to help with search and rescue operations.

The typhoon brought powerful winds and heavy rain... causing about 200 rivers to overflow. Levees burst on about 50 of them, causing flooding across widespread areas. NHK has learned over 10,000 houses were damaged.

Fukushima prefecture in northeastern Japan was one of the hardest hit areas. At least 25 people in the prefecture died. Among them was a young boy and his mother who were found four kilometers apart. Another son is still missing. A large portion of the damage was caused by an overflowing river that runs through a densely populated area.

Fukushima resident: "We cannot use restrooms, we cannot drink water and convenience stores are closed so we are in trouble."

Officials say many areas received up to 40 percent of their annual rainfall over a span of two days.

Resident: "The home where I've lived for many years has been devastated. I couldn't hold back my tears when I came back from a shelter and realized what had happened."
The heavy rain also caused about 140 landslides across the country. In Gunma Prefecture, four people were killed when their homes were washed away.

Meanwhile, nearly 35,000 households are still without electricity. Another 130 thousand homes have no running water as of Tuesday morning and it's unclear when utilities will be fully restored.