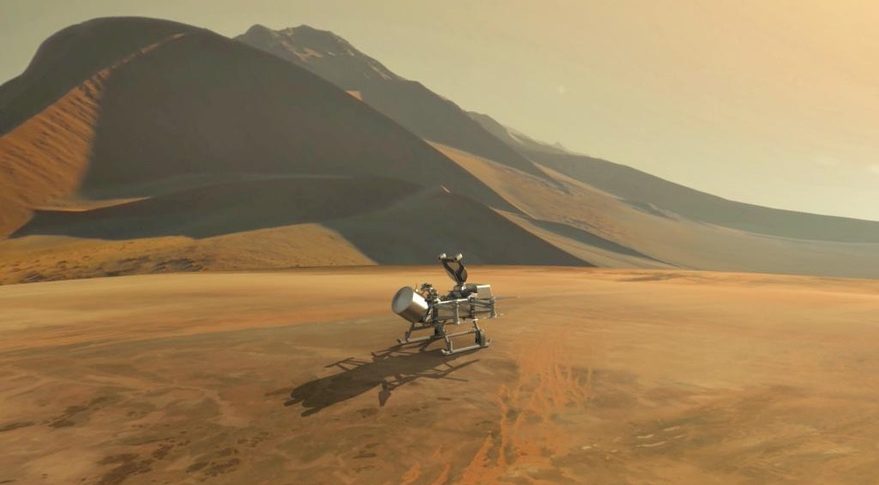 Nasa is sending a nuclear-powered drone to Saturn’s largest moon to explore multiple locations in search of habitability and life.

The space agency said Thursday that a dual quadcopter called Dragonfly would fly from location to location over Titan, a moon with conditions that mimic those on earth 4bn years ago.

If Dragonfly is successful, it could help to reveal how life arose and took hold of our planet. Those secrets could offer valuable insights into the search for life elsewhere in the universe.

The Dragonfly mission is part of Nasa’s competitive New Frontiers Program and is aimed at understanding how chemistry gave way to biology.

Scientists have long considered Titan an attractive place to study whether it would be capable of supporting microbial life.

Titan’s landscape is dominated by “sand dunes” and “waterways” composed of hydrocarbons – liquid methane and ethane. Its surface is composed of water ice, frozen as hard as rock. Beneath the crust hides a liquid-water reservoir that astrophysicists believe to be the same temperature as the shallows of the Pacific Ocean.

Titan’s organic chemistry is composed of complex molecules that may well be, at minimum, precursors for alien biology. It has long been an object of fascination of astrophysicists.

Describing Titan, the late astrophysicist Carl Sagan once wrote: “The molecules that have been raining down like manna from heaven for the last 4bn years might still be there, largely unaltered, deep-frozen, awaiting the chemists from Earth.”

Announcing the expedition on Thursday, Dragonfly’s principal investigator, Elizabeth Turtle, a planetary scientist at the Johns Hopkins University Applied Physics Laboratory (APL), said there was little certainty about what kind of biological soup might await.

“Titan has been doing chemistry experiments for hundreds of millions, if not billions, of years. And what we want to do is go pick up the results of those experiments.”

The kind of experiments that have been going on for millions of years would simply take too long to replicate in a laboratory, Turtle said. As far-fetched as it might seem, she said, it was “simply” more feasible to send a nuclear-powered drone on a billion kilometer journey to see for ourselves.

“Our habitable world has so many different environments that can support life,” Turtle told the magazine. “So it’s important to be able to look at this broadly.”

The interplanetary technology Nasa is deploying to reach Titan, perhaps as soon as 2034, is an offshoot of modern drone technology.

The spacecraft will be at once a drone and a lander, designed to take advantage of Titan’s Earth-like gravitational field and aerodynamics to maximize its ability to explore.

The instruments onboard Dragonfly are not dissimilar from those on Nasa’s Curiosity Mars rover. Like Curiosity, Dragonfly will be nuclear-powered, carrying a radioisotope thermoelectric generator, rather than sun-powered. On Saturn, the sun’s rays are too faint to reliably power a solar flying drone and the atmosphere on Titan is too soupy to allow permit enough light to penetrate.

The craft will be fitted out with a range of scientific instruments designed to detect complex organics and biosignatures. And it will be able to measure seismic activity, perhaps offering insight into the ocean beneath which is believed to be under immense pressure.

Biogeochemists at the University of Illinois at Chicago, who are also working on Dragonfly craft, have reportedly developed unique experiments designed to replicate the conditions of Titan’s ocean within a series of Ping-Pong-ball-sized incubation chambers.

“These types of adaptations can be very useful to understand, so we can better target the types of molecules we would find on Titan,” the university’s Fabien Kenig told the magazine. “Even if it’s very, very slow – when it’s an ice-covered environment that remains stable for millions, billions of years, slowness is irrelevant.”

Dragonfly was one of two finalists being considered for the New Frontiers award. Another contender, Caesar, led by Steve Squyres at Cornell University, aimed to grab a piece of a comet’s surface and bring it back to Earth.

Only three other missions have been funded through the program: the Juno spacecraft, in orbit around Jupiter, has been observing the planet’s roiling atmosphere and magnetic field. Another, New Horizons, flew by Pluto in 2015, and flew by a Kuiper Belt object in December of 2018. The third, Osiris-Rex, is currently on an asteroid-sampling mission is currently in orbit around the asteroid Bennu.

Titan was last explored in 2017, by the Cassini-Huygens mission.The Cassini spacecraft plunged into Saturn, ending two decades of exploration.